If DAOs are eventually supposed to be both decentralized and autonomous, can there be a leadership component? Probably not in the traditional sense of leadership. DAOs will not be an easy button to reorganize the structure of community and work. It will involve a significant shift in mindset as many of us work to break the patterns of the past.

We will see mistakes, failures and groundbreaking innovations. If you consider the major transformations of human society, one could argue that Web3 is one that will deserve consideration. For context, I present the following simplified historical narrative. Hunter-gatherers moved with the seasons to where the resources were abundant. When they figured out how to farm, they built homes and communities. With a stable food supply, the population increased, which led to higher demand for goods.

The increase in demand drove new processes and sparked the growth of factories. As humans moved through each of these societal mechanics, they acquired new skills and perspectives helping them navigate their present world and prepare them for the future version.

Leadership is a relevant topic for DAOs, and it has been interwoven into all aspects of humanity since the time of our hunter-gatherer societies. More than likely, an elder or one of the stronger hunters determined the group’s next move. Since then, we’ve observed many iterations of leadership with most following a top-down approach. As we discussed in A Measured Sense of Belonging, the core building blocks of DAOs are rooted in well-known philosophical constructs.

Staying with our pattern-breaking mindset, leadership is traditionally considered to be a hierarchical structure where one message created at the top is disseminated throughout the levels of an organization with non-compliance being the express lane to termination. DAOs present an opportunity to reconsider leadership in a completely new direction.

Microsolidarity is a project that explores leadership and group dynamics. More specifically, it is a community-building project based on a sense of belonging created by Richard Bartlett and a team of collaborators. It imagines leadership as hospitality, meaning that instead of a boss-employee relationship, it is structured as a host-guest relationship.

Compared with the engrained form of leadership to which we are accustomed, this concept could seem over-accommodating and unproductive. By employing the curious nature of a beginner’s mind, it could appear to be the key to holding space for the superpowers of the individual contributors of DAOs.

In 2016, one of Bartlett’s collaborators, Alanna Irving created a framework called Full Circle Leadership that explores this concept in more depth. The visionary and operational personas show an oscillating energy between divergent thinking and convergent thinking, which is applicable to how innovation turns into execution. There is a similar thread within the inner workings of many DAOs.

A group of people come together around a common theme, and they think big on ways to activate that theme. At a point, the team needs to determine the best ideas to execute that activation. Could Irving’s framework be applied to DAO structures? Let’s break it down. 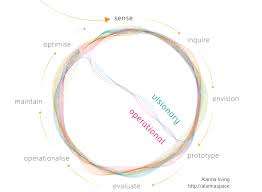 SENSE – As the input to this cycle, imagine a spider trying to sense the vibration of something on their web. First and foremost, this activity requires space. Specifically, an undersubscribed calendar with time for free-thinking.  This stage also benefits from an empathetic approach and an interdisciplinary mindset. The visionary persona leads this effort.

INQUIRE – The hospitality concept applies to this step. By exploring with pure curiosity and releasing expectation, a DAO could really tap into the skills of its individual contributors. During this stage of engagement, the core contributors of the DAO could identify and elevate specific skill sets of the other community members. The visionary persona leads this effort.

ENVISION – DAOs often describe leadership as a spectrum, and this could be a stage where the visionary persona begins to share small pieces of leadership with the operational persona. Imagine if the proverbial torch was broken down into individual particles and those particles were shared by both personas. This is where big ideas are unpacked and sorted into bite-sized chunks.

PROTOTYPE – The idea further morphs into an executable solution starting with a proof-of-concept. The visionary persona cedes more of the leadership spectrum to the operational persona who pulls in a tinkerer mindset who loves building something from the ground up.

EVALUATE – At this point, the DAO could consider an objective methodology to evaluate feasibility and fit of the solution. Using this framework, the community could compare the proof-of-concept to the big idea and its alignment with the common theme of the DAO.

OPERATIONALIZATION – After hearing from the larger group, the leadership spectrum shifts further to the operational persona freeing the visionary persona to focus on the next idea. Any organized technical building would happen in this phase.

MAINTAIN – After launch, this could be where the autonomous aspects of the DAO start to appear. If the idea and its execution are good enough, the DAO could consider implementing self-sustaining operational mechanics, which will eventually free the operational persona to focus on the next idea.

OPTIMIZE – Both the operational persona and the visionary persona reappear in partnership to consider new efficiencies and functionality to improve or incorporate this project into others.

The first step to understanding leadership in the context of a DAO is to break the existing patterns related to leadership in general. When the early ideas attempting to explain the subatomic realm collided with traditional physics, it wasn’t pretty. Legacy frameworks become agitated and divided when curious minds present evidence of a potential new way of thinking.

If we want things to be different, we need to think differently. DAOs present a clear requirement to consider a new structure for leadership. Over the next few years, we’ll see some amazing experiments, major failures and some unforeseen breakthroughs. The good news is that we can learn from them all.