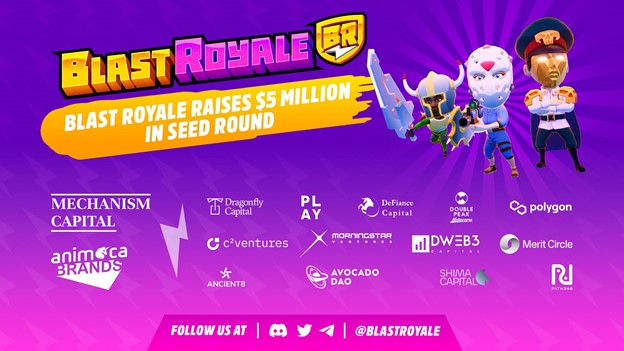 In an announcement today, London-based game development firm, First Light Games successfully closed a $5 million private token sale in an effort to boost the development and adoption of its blockchain-based mobile game, Blast Royale. The private token sale was led by top investors in the space including Mechanism Capital and Animoca Brands, a blockchain firm that has already invested in over 150 NFT-related companies over the past year.

The funds raised will be used to continue to develop the game, attract top talent, and grow the game community. Furthermore, the funds will be used to create new features in the game including tournaments and high-stakes Blast Royales, planned to be launched later in the year as First Light Games plans a push into esports.

The presence of top and influential crypto investors in the company sets the foundation for a successful GameFi ecosystem on Blast Royale,  Neil McFarland, CEO of First Light Games shared. With a shared vision, the investors aim to make “Blast Royale one of the best gaming titles (in the blockchain space)” and provide gamers with a “compelling and fun gameplay that makes Battle Royale game suitable for the Web3 generation,” Neil added.

Developed in 2021, during the NFT and GameFi boom, Blast Royale offers users a platform to battle in a royale survival match. The gameplay involves 30 players entering the fighting grounds in a ‘last one standing’ competition to win various rewards. Players battle and use their rewards to build up their characters using NFT items won or collected within the game. The players’ meta inventory influences the quality of items carried into a match and the utility of their character.

Blast Royale uses two native tokens, Blast ($BLST), the primary token, and Craft Spice ($CS), the in-game play-and-earn token of the Blast Royale metaverse. The $CS token gives players a wide range of utility within the game including buying enhancing equipment for your character or repairing damaged equipment. Players earn $CS tokens when playing the battle royal matches based on their performance, invested time, and overall effort. The $BLST token is the main token on the Blast Royale marketplace where users can purchase NFTs.

Having invested in over 150 gaming and NFT-related startups, Animoca Brands executive chairman and co-founder, Yat Siu believes Blast Royale will transform the GameFi industry with its “high quality of gameplay”.

“Given the progress so far and the First Light Games team’s strong pedigree of several iconic hit games, we believe that Blast Royale will be an appealing and compelling metaverse entry for a new generation of gamers,” Siu commented.

In a similar breath, the Principal at Mechanism Capital, Eva Wu reaffirmed the company’s goals of investing in the growing crypto gaming industry.

“When a space like crypto gaming is in its infancy, it’s incredibly important to back strong thinkers who shape how the space evolves,” Eva Wu said in an interview. “We’re very excited to work with the team [Blast Royale] to tackle what a play-to-earn world might look like.”

At the end of Q2 2022, the Blast Royale development team is planning on launching a testnet for the game, which, if successful, will usher in the global launch of the game in Q3. Finally, the team has also added a competitive metagame layer to the gaming equipment, giving players strategic agency over the optimal loadout to bring into battle.