NiftyDOS brings you the mind bending time travel plot that only 1980s Sci-Fi films could deliver. So jump into the nearest DeLorean and buckle up for the ride.

NiftyDOS is the product of a team of computer scientists, artists, and dreamers from the early 1980’s in a parallel universe. The team’s work was based on the idea that no two instances of a software should be the same, which from there, led them to develop 22 groundbreaking (at the time) playable apps, alongside a state of the art personal assistant who goes by the name of Mr. Pencil.

After miraculously being rediscovered and repackaged, the work of NiftyDOS is now coming to the 21st Century of this very universe, where, in a concoction of retro and modern technology, will be distributed via NFTs on the Ethereum blockchain.

Each NFT is visually represented by a unique 1-of-1 square artwork piece which is a digital collage made up of elements of the NiftyDOS Operating System. These have a specific background color theme, a floating elements theme, a visual preview of one of the 22 NiftyDOS Apps, and your very own distinct Mr. Pencil in the lower right corner of the digital composition.

When you interact with your unique version of the NiftyDOS operating system, you will be able to interact with your Mr. Pencil Personal Assistant. Mr. Pencil pops up on request when you click on the “?” box on the bottom right bar in the OS. Each Mr. Pencil is made up of several attributes that make up his unique DNA. They include a hat or wig, facial hair, glasses, mouths, skin tone, jewelry, collar color, and pencil base color. No two Mr. Pencils are the same. 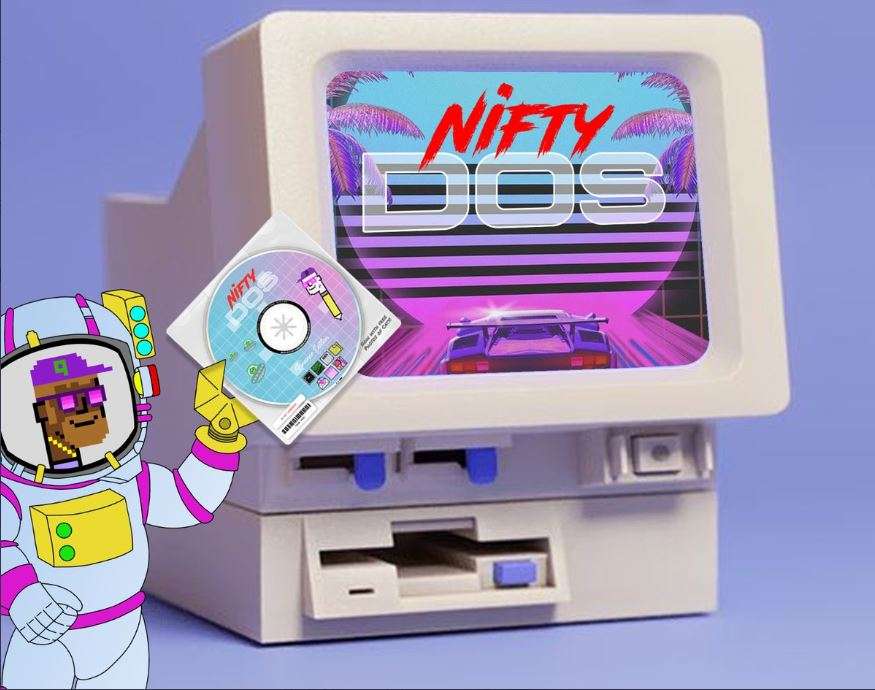 According to a Mr. Pencil promo video, ownership of a NiftyDOS NFT will also come with free cat photos, as well as “Steve’s UFO Research”.

A maximum of 10,000 NFTs will be available to mint, however the actual quantity of minted NFTs will be decided by the demands of you, the consumer, but in any case will not exceed the max cap of 10,000 units.

The mint will take place on April 28th at 6PM EST, with each NFT costing 0.06 ETH. The project’s silver whitelist (which is still open) will also receive early pre-sale access to the mint.

The 22 apps of NiftyDOS take users right back to the birth of the Information Age, as they each include vaporware style, early Internet imagery, and glitch art. The premise of the apps themselves range from old games, to random news, or from paint tools, to dubious weather forecasts, all of which embody a seriously outdated, yet fun user interface.

After the NFT mint, NiftyDOS will be unleashing a flurry of Easter Egg hidden puzzles, where winners will win an array of prizes ranging from Ethereum to NFTs. Clues and puzzles will be hidden inside the apps in the DOS. Such prizes will also be available for those who win contests centered around creating artworks, music beats, and other creative content by using the apps that are built in the NiftyDOS Operating System.